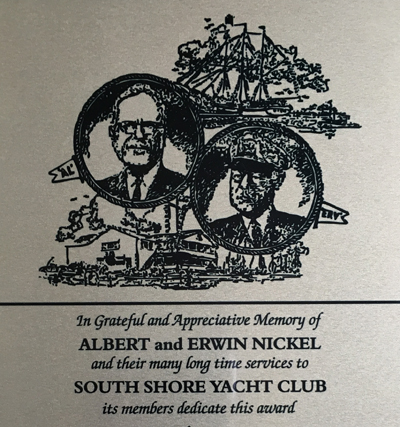 Al was secretary, treasurer and COMPASS editor for over 30 years. Erv performed a variety of tasks during the period. Both provided steadying influence during the perilous period of the Great Depression. Their leadership touched the lives of many at South Shore.

The idea of an award to honor them, endorsed by many, was formalized in the spring of 1971 when a special committee under the chairmanship of Carl L. Mueller Jr. and including as members Norman Hundt, Harry Ziemann and Del Kemnitz settled on a memorial plaque.

Donations were solicited to finance the award. Life member Ross Lewis designed the plaque and keeper awards. Past Commodore George Walker did much of the metal work and engraving. The finished trophy was presented to the Club at the 1972 Commodore's Ball.

It is to be awarded each year to a member in good standing for contributions to South Shore Yacht Club representative of the high standards set by Al and Erv Nickel.

Selection of the recipient is made in the summer of each year by a committee including the Commodore, the Vice Commodore as an observer, the Chairpersons of the Sail/Race, Powerboat and House Committees and a Life member chosen by the Commodore.

The basis of consideration includes at least five years continuous membership, years of service on standing committees, character and sportsmanship of the recipient, participation in sailing, power boating or general Club activities and at least one year of outstanding service. Candidates must be active on a standing committee or in a Club post in the year for which the award is presented.

The plaque remains at South Shore Yacht Club. Recipients are given keeper awards.